One small flap for P3, one giant flight for Latham’s Snipe 2018

A Latham’s Snipe at Jerrabomberra Wetlands by Julie Clark.

For the first time we have tracked the Latham’s Snipe’s journey from Canberra to Japan and back, and the results are not what we expected.

The Latham’s Snipe is a migratory bird that spends half the year in South Eastern Australia filling up on wetland bugs, and the other half in Hokkaido, Japan, breeding and hatching its young.

Jerrabomberra Wetlands is a known safe-haven for this species, and through a collaboration between the Federation University (Ballarat), South Beach Wetlands and Landcare Group (Port Fairy) the Woodlands and Wetlands Trust, ACT Government, Canberra Ornithologists Group and the Wild Bird Society of Japan, we are rapidly learning more about their mysterious behaviour.

Every year at Jerrabomberra Wetlands a team of volunteers and researchers traverse the swamps to set up mist nets in an effort to catch and tag individuals. Last year several birds were fitted with geolocators–tiny light sensitive gadgets that track where the bird has been over time. This year we managed to recapture one of these birds–P3–and retrieve its geolocator, one year after it was fitted with the device.

After analysing the data captured on the geolocator, lead researcher–Dr Birgita Hansen–found that the details of the journey seemed to differ to that of the bird captured two years ago in Port Fairy:

“We can say for sure that P3 has staged somewhere in south-east Queensland on its northward migration, it has spent the breeding season in either the very north of Hokkaido or southern Sakhalin in Russia (around late April to early August), and then returned to Australia via central Honshu and possibly even Papua New Guinea.” 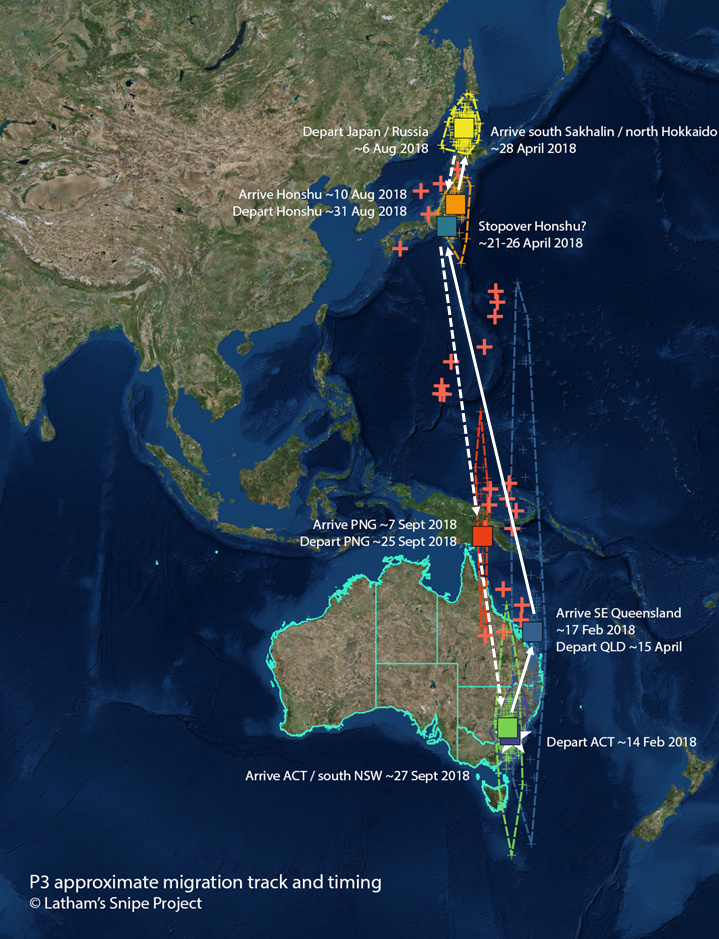 The journey taken by P3 from Canberra to Japan and back (image provided by the Latham’s Snipe Project).

Why the birds stop in these locations is yet to be deciphered, and the exact whereabouts is yet to be confirmed. However–like other migratory species–it highlights the need for international conservation of the species and cross-country collaboration. The journey from Australia to Japan is fundamental to their existence, and if the Latham’s Snipe is to survive into the future, the wetlands they depend on need to be protected.

We are proud to work with research teams and volunteers from Victoria all the way to Japan, and ages 7 through to 70. The passion, hours, skills and sharing of knowledge is one-of-a-kind and shows what is possible in other parts of the world.

“I would like to thank the volunteers in Canberra who have laboured alongside me in the swamps in Canberra, trying to catch snipe through sleep-deprived nights.” – Birgita Hansen

In May this year, 5 of our Young Rangers travelled to Japan to learn about the conservation efforts being carried out internationally. Their trip was made possible with funding from the Australia Japan Foundation.

P3 back in the hands of researchers after an epic journey.

P3 back in the hands of researchers after an epic journey.

ACT Young Rangers playing a game with Japanese students at the nature centre in Utonai.